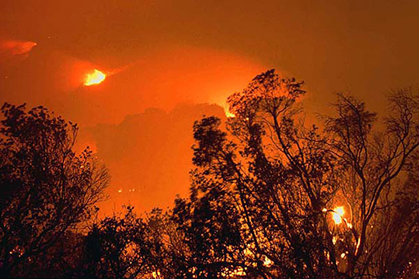 Santa Barbara County is known for its temperate Mediterranean climate with consistent periods of prolonged drought. The local weather patterns combined with the adjacent steep mountains dominated by seasonally flammable grasses and chaparral, provide the conditions that make this region’s ecosystem one which has included wildfires for thousands of years. A study of microscopic charcoal from the Santa Barbara Channel indicates that over the past 560 years, large wildfires (greater than 50,000 acres) have occurred in this area on an average of every 20 to 30 years (Mensing et al. 1999). Many areas on the southern California coast, mountains, and valleys have seen fire frequencies increase dramatically over the last century with most of the increase associated with population growth occurring at the end of World War II (Keeley and Fotheringham 2001; Syphard et al. 2007).

Since the 1950s, the greater Santa Barbara area averaged one large fire per decade; however, the number of large fires within and adjacent to the County has increased substantially over the last decade. View an online interactive California Fire History Map showing fires dating back to 1848.

Local documented fire history starts with the 1955 Refugio Fire that burned 79,428 acres, including both slopes of the Santa Ynez mountain range from Gaviota to San Marcos Pass. The 1964 Coyote Fire burned east of the San Marcos Pass, consuming 65,339 acres and destroying 106 structures. In 1966, a plane went down in the upper reaches of the Sisquoc watershed and sparked a 94,000 acre blaze that was called the Wellman Fire. In 1971, the Romero Fire burned 14,538 acres and killed four local firefighters on October 7, 1971 before being contained.

One of the first Wildland Urban Interface (WUI) fires in the United States that was studied for structure survivability was the 1990 Painted Cave Fire. It started near the top of the San Marcos Pass by the community of Painted Cave and, under strong sundowner winds, raced downslope to Hope Ranch in several hours, jumping highway 101 along its way. It burned almost 4,900 acres and destroyed over 440 homes, 28 apartments, and killed one civilian. The Painted Cave Fire spurred statewide collaboration and forced governments to invest in local solutions to the growing wildfire challenge, including Fire Safe Councils.

Starting in 2007, there were three consecutive years of notable fires in Santa Barbara County. The 2007 Zaca Fire burned for four months in the backcountry, scorched many of the 240,000 acres within its final perimeter for the first time in recorded history, and cost $120 million to contain.

Both firefighters and local citizens will long remember 2008 as an extraordinary fire year. Wildfires burned for most of the summer on the Monterey Ranger District of the Los Padres National Forest. While the Monterey County fires were burning, the Gap Fire started and burned just under 10,000 acres above Goleta. This portion of Santa Barbara County was once again served well with its agriculture belt which provided a buffer separating the wildfire from the city. Later in the fall, a fire ignited in the hills above Montecito and burned under one of the strongest sundowner events in recent memory (gusts up to 85 mph) into the community. The Tea Fire was controlled having burned 1,940 acres and destroyed 210 homes in a single burn period.

On Cinco de Mayo, 2009, the Jesusita Fire started along the Jesusita Trail below Cathedral Peak in the Santa Barbara foothills. The remote location of the ignition made it impossible for fire crews to gain access and extinguish the blaze before a strong sundowner wind event pushed the fire into the populated areas of Mission and Rattlesnake Canyons. When it was controlled another 80 homes and 79 outbuildings were destroyed by the 8,733 acre wildfire. Later that August, the La Brea Fire started in the remote mountains east of Santa Maria. The wildfire burned under severely hot and dry conditions and consumed nearly 10,000 acres a day for multiple burn periods before being controlled several weeks later with a final size of 89,489 acres.

In 2016, the 7,400 acre Sherpa Fire started in almost the exact location as the 1955 Refugio Fire and caused the closure of Highway 101, interrupted Amtrak services and forced the closure of the popular state beaches near Gaviota. Later that year, the Rey Fire started just east of Lake Cachuma along Paradise road, burned 32,600 acres, destroyed five structures, and did significant damage to Forest Service recreation facilities in the Santa Ynez Recreation Area.

The 2017 fire season is another which will long be remembered by Santa Barbara County residents. The Whittier Fire started near Camp Whittier on the north side of the Santa Ynez Mountain Range and burned rapidly south up and over the range towards the western edge of the City of Goleta. Thousands of people were evacuated and the 18,430 acre fire destroyed 16 residences and 30 outbuildings along with significant utility infrastructure. Then on December 4th, the Thomas Fire started off highway 150 in Ventura County in historically severe conditions. The fire ended up burning 281,893 acres before being fully contained on January 12, 2018, The Thomas Fire destroyed at least 1,063 structures as it marched from its point of origin to Gibraltar road in southern Santa Barbara County and was the largest wildfire in modern California history at the time, being surpassed later in the year by the Ranch Fire in Mendocino, Lake, Colusa, and Glenn Counties.

Those lucky enough to call Santa Barbara County home are rewarded with a rich natural landscape that will always include wildfire. The best way to prepare yourself for the inevitable next wildfire, is to educate yourself on your risk, implement wildfire mitigation actions to your home and property, and have a clear plan in place. The Santa Barbara County Fire Safe Council is here to help you in your preparation efforts.

We are currently accepting applications for an Executive Director.  All correspondence should be emailed and addressed to the Santa Barbara County Fire Safe Council, sbfiresafecouncil@gmail.com.