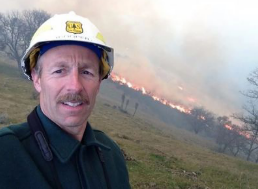 Kevin Cooper began his career in 1980 at the University of Montana studying grizzly bear ecology and working summers as a backcountry ranger and wildlife researcher with the US Park Service at Mount Rainier and Crater Lake National Parks. After completing graduate school at the University of Alaska and Oregon State University studying Rocky Mountain elk he moved to San Luis Obispo in 1987 to work as a biologist on the Los Padres National Forest, where he worked as a district, zone, and finally the Forest Biologist before retiring in 2018.

Kevin also worked throughout his wildlife career as a firefighter on hand crews, and eventually became the Lead Resource Advisor and Burned Area Emergency Response (BAER) leader, coordinator, and liason for large wildfires such as the 2018 Thomas Fire where he was able to bring together all of his skills as a leader to help organize the interagency flood assessment before, during, and after the Montecito debris flows.

We are currently accepting applications for an Executive Director.  All correspondence should be emailed and addressed to the Santa Barbara County Fire Safe Council, sbfiresafecouncil@gmail.com.